Aqua Teen Hunger Force (often abbreviated as Aqua Teen or ATHF) is the show on Adult Swim that tells the story of Frylock (a floating French Fry box), Master Shake (a six-foot-tall milkshake), Meatwad (a meatball), and their human neighbor, Carl. Recurring characters include the Mooninites (space monsters from the moon), the Plutonians (spiked aliens from Pluto) and MC Pee Pants (an insane rapper spider from the labratory of the mad scientist named Dr. Weird).

The directors of ATHF are Matt Maiellaro and Dave Willis. The company producing This show is called Williams Street which produces most of the comedy shows on Adult Swim. The voice actors are improvising a lot of the scripts. The theme song was written by the famous 80s rapper Schoolly D. Most of the voice actors have worked on the Adult Swim show Space Ghost Coast to Coast. Aqua Teen Hunger Force is the networks longest running series.

The characters of ATHF was originated from Baffer Meal which is an episode of Space Ghost Coast to Coast. They were also mascots for the animated fast food chain Burger Trench. In the picture of the mascots, they looked the same but Frylock and Master Shake had different looks.

Even though the characters came from baffer meal, the episode didn't even air years after ATHF air and it never aired until the show became popular, instead, Baffer Meal was re-written as Kentucky nightmare while the producers aired the ATHF episode Rabbot which was the first episode of ATHF. AT first Adult Swim producers didn't think that ATHF would be a hit, but they still allowed the show to be aired for the fact of the block of programming. A 16 episode season of ATHF was put in shortly after the creation of the show. Now it just so happens to be one of the highest rated Adult Swim shows.

The title of the show also came from space ghosts baffer meal. The word "aqua" sounds like it doesn't have anything to do with the show but it's called that because of the fact that they like to swim in their neighbors pool most of the time. The rest of the name comes from the fact that their a force that takes over hunger in teens. Don't be fooled by the name their not really teenagers. The force doesn't have any memory on their history but Meatwad says in Spirit Journey Formation Anniversary that he is about 55 years old. In Ezekial, Master Shake says he's 30 or 40 years old.

In one of the first episodes Master Shake calls themselves Aqua Teen Hunger Force and their supposed to solve crimes for cash. The name they called themselves and their jobs were dropped by Cartoon Network producers because they didn't want to make a show all about a detective team go and do a whole bunch of random things. In one of the episodes that stopped the detectives, Frylock didn't think they were making enough money.

The location of the show is unknown, but in the show at the beginning of most of the shows, a text says 'South Jersey Shore' when they show Dr. Weird's lab. In the episode "Remooned", it leaves clues on where in South Jersey the show is set. You could see on Carl's license '089??' which just so happens that the area code could be in New Brunswick, North Brunswick, Waterworks and Highland Park. And confirmation to that is that they're all in southern and central New Jersey. In the first episode that MC Pee Pants was debuted, Meatwad and Carl were told to go to the Street 612 Wharf Ave. That happens to be a real road in Red Bank, NJ.

The characters of ATHF were kind of thought from a Hannah-Barbara series Teen Force. Frylock was related to Elektra by the fact that Frylock can shoot lasers bolts from his mind to his eyes. Meatwad was related to Kid Comet by the fact that Meatwad can transform his shape into other types of designers. His most popular shapes are a hot dog and an igloo. Master Shake is a less futuristic version of Molecule Lad. The 2 most popular enemies on the show are the Mooninites, and they're related to the enemies of Teen Force called Asromites.

During the duration of seasons 1 and 2, episodes that are called cold opened are when they show Dr. Weird's lab in the very beginning of the episodes. With the help of his assistant Steve, they create the monsters and disasters that happen to be what each episode is about. For example: In the episode Rabbot (which was the first episode) Dr. Weird and Steve create a giant robot that looks and and acts like a rabbit in certain ways. Dr. Weird always say before each episode, "Gentlemen, Behold" and then the camera reveals what his disaster is, and that is the basis for the plot of the episode. In the 4th season, Dr. Weird was dropped when the spin-off Spacecataz was created by the directors. These spin-off segments have included the Mooninites (Ignignokt and Err) and the Plutonians (Oglethorpe and Emory) showing them together and insulting each other and playing pranks on each other in spaceships. The whole Spacecataz spin-off was never aired but shown on the season 4 DVD box set.

Dr. Weird has been dropped in the 4th volume except the movie, but since after the movie he was never shown again. However, he will reappeared in season 8.

During the duration of the seven seasons there have been 99 episodes (except "Boston"). All the episodes' duration is about eleven minutes, except for Deleted Scenes and The Last One Forever and Ever (For Real This Time) (We Fucking Mean It), which was about 24 minutes. Whenever Adult Swim airs the 2 episodes, they show the first half and the second half separately. There were 11 seasons with a total of 139 episodes.

The Mooninites have their own theme song, which they have played at the end of many episodes they have stared in. The song was written, produced, and performed by Schoolly D. In the song there are 3 verses, and each verse is played in a different episode.

In the episode of ATHF, Party All The Time, they played a song called "The Party Song", written by the directors of the show and a guest on the show, Andrew WK. They played this song in another episode, Grim Reaper Gutters. They play this song in a flashback video also.

Famous rapper MC Chris does the voicing for MC Pee Pants, Little Brittle and Sir Loin. He has also written songs for during the show.

There was a film based on the show ATHF. The film was called Aqua Teen Hunger Force Colon Movie Film for Theaters. This film was released in theaters on April 13, 2007. The movie follows how the Aqua Teens originated. The film included the band Rush and professional drummer Neil Peart. It also included a character named Walter Melon, an anthropomorphic slice of a watermelon In the begining of the movie, heavy metal band Mastodon makes an appearance. In the film, there is a new member of the Aqua Teens, Chicken Bittle, who is a chicken nugget. Bruce Campbell voices him. A team of characters that made appearances in the TV show (the Plutonians, the Cybernetic Ghost of Christmas Past from the Future, the Mooninites, MC Pee Pants, Dr. Weird and Steve) all make appearances in this movie.

Adult Swim aired the movie on April Fool's Day before it came out in theaters.

Aqua Teen Hunger Force Zombie Ninja Pro-Am is a video game created by Midway Games for the Playstation 2 on November 2007 Dave Willis was in an interview on G4 and announced that the game is in stores. In the game you can fight villans from the game and play golf at the same time. Some of the villains include The Mooninites, The Brownie Monster, and Carl's Giant Crabs. Aqua Teen Hunger Force Destruct-O-Thon is another video game starring the Aqua Teens. The game is for the moble phone and was published by Glu on December 7, 2004. The objective is to strike things from the show across the street the Aqua Teens live on.

The first eight seasons have been released and distributed on DVD in Volumes by Adult Swim and Warner Home Video. Each set was also released in Region 2 and by Madman Entertainment in Region 4. The movie was released on a DVD set titled Aqua Teen Hunger Force Colon Movie Film for DVD, with the season four episode "Deleted Scenes" as a special feature on August 17, 2007. The season five episode "Robots Everywhere" was also released as a special feature on the Aqua Teen Hunger Force Zombie Ninja Pro-Am video game on November 5, 2007, months prior to official television debut on January 20, 2008.

In 2015, the series was made available for on-demand streaming on Hulu Plus, as part of a deal made with Hulu and Turner Broadcasting, every episode is available for streaming. 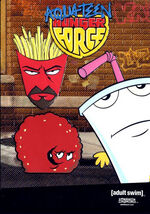 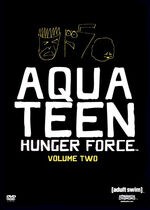 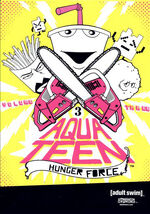 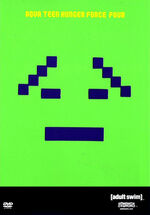 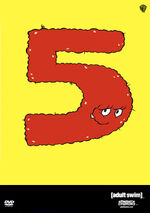 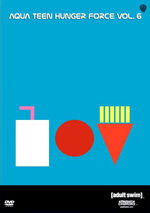 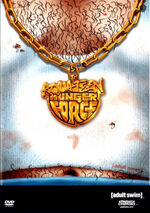 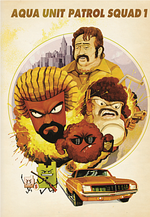 Volume Eight
Add a photo to this gallery

Retrieved from "https://adultswim.fandom.com/wiki/Aqua_Teen_Hunger_Force?oldid=11456"
Community content is available under CC-BY-SA unless otherwise noted.