Fena: Pirate Princess is a series produced by Adult Swim, and Crunchyroll, in collaboration with Production I.G.. The series was announced by Production I.G.'s producer Rui Kuroki at Anime Expo.

The series premiered August 14, 2021 subtitled on the Crunchyroll website, while airing dubbed into English on Toonami.

Fena Houtman remembers little about her childhood. Orphaned and raised as a servant in a brothel, her life changes when she escapes to an island of pirates where she discovers the truth behind her family. With Fena being the only one able to unlock her family’s secrets, and a formidable crew of female pirates on her tail, she must take her place as captain of her Samurai crew for a high seas adventure! 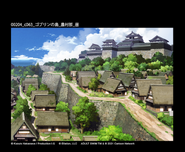