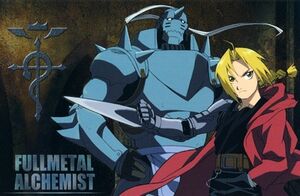 This article is about the actual series. If your looking for the title character, go to Edward Elric.

Fullmetal Alchemist, commonly abbreviated as FMA or Hagaren by fans, is a manga series created by Hiromu Arakawa and serialized in Monthly Shonen Gangan. It has also been adapted into an anime TV series and a movie sequel, as well as several spin-off novels and video games.

The manga is still running in Japan, and 14 volumes have been released so far. The anime, on the other hand, is finished, and consists of 51 episodes and a full-length movie sequel. Both incarnations (the manga and the anime) have seen massive popularity in both Japan and North America; last year the anime was voted #1 best liked anime of all time in Japan in a September 2005 TV Asahi web poll.[1] It was put down for #1 again for 2006 in a recent poll.

Fullmetal Alchemist is set in the early 20th century in a country called Amestris in an alternate-historical Earth with technology dating from early 20th century Europe. In this alternate world, the pseudoscience of alchemy is heavily used, but takes on a further fantastic element not seen in real-life alchemy. Real-world alchemists attempted to transmute gold from lesser metals. In the fictional world of the series, alchemy becomes the science of transmuting matter into different matter through the use of transmutation circles—based on real-world science, yet also magical, with seemingly infinite uses. Talented alchemists may apply to take a State Alchemist test to join the Amestris military's State Alchemists.

Edward and Alphonse Elric were children living in the rural village of Resembool in the country of Amestris. Their father, a talented alchemist, had left home when Edward was very young and Alphonse was still an infant. Years later, their mother, Trisha Elric, died of a terminal illness. After their mother's death, the two boys decided to attempt to revive their deceased mother using alchemy. They studied alchemy with a teacher and then used their father's books and notes that he had left behind to recreate a human transmutation circle. However, this attempt failed, costing Edward his left leg and Alphonse his entire body. In a desperate effort to save his brother, Edward sacrificed his right arm to affix his brother's soul to a suit of armor. After that, Edward's left leg and right arm are fitted with two sets of Automail, a type of advanced prosthetic limb. In the original Japanese, the term "Fullmetal" is used to describe a person who is stubborn. In the series it is often mistakenly attributed by minor characters to Ed's automail arm and leg, or Al's armor body.

A State Alchemist by the name of Roy Mustang arrives during the failed human transmutation in response to letters the boys had sent out seeking information about their father (in the hopes that they could get the attention of their father so that he would come home). After seeing their skill at alchemy, Mustang suggested that the way for the two boys to achieve their goals would be to become State Alchemists and work for him. Spurred on by the man's proposal, Edward set out to become a State Alchemist, enabling him to use the resources available to State Alchemists to discover a way to restore what he and Alphonse had lost. The brothers eventually learn of the Philosopher's Stone and set off in search of it as a means to restore their bodies. Along the way they discover secrets about the Philosopher's Stone and find other people who seek it as well.