Metalocalypse is a animated series centered around the fictional death metal band Dethklok.

In the series, Dethklok is a band which enjoys a popularity level unheard of in reality, by either a heavy metal band or otherwise. The band in fact ranks as the seventh largest economy on Earth by the end of second season.

The band's popularity is so powerful that impressionable fans will do anything its songs tell them to, even if that means death, which is usually the case. In Dethgov, fans of Dethklok murder the governor of Florida after he disrespects lead singer Nathan Explosion, whom they then proceed to elect governor in a landslide write-in victory. If Dethklok endorses a product or service, competitors are quickly driven out of business. Organizations worldwide, ranging from governments to businesses, go out of their way to avoid hindering Dethklok, to the point that the band is allowed to maintain its own police force and can get away with any crime imaginable with virtually no repercussions, although the band is often too ignorant to even notice that they are committing illegal acts.

The members of Dethklok tend to cause disaster wherever they travel, and anything remotely associated with them likewise tends to attract civil unrest simply by existing. Dethklok concerts are so notoriously violent that those attending are required to sign pain waivers at the entrance, releasing the band from legal liability in the very likely case they are killed or maimed.

The band can only function because it is managed by a clean-cut, ordinary-looking businessman named Charles Foster Offdensen, who lives with the band in Mordhaus. Offdensen appears to run every business aspect of the band, ranging from legal counsel to finances. He is extremely savvy and competent in his duties as well as other matters. As the brains behind the band, Offdensen operates in an understated, business-like manner. He is remarkably patient and professional when dealing with Dethklok despite their ignorance and frequent rudeness toward him, apparently tolerating their artistic eccentricity - as well as indifference to their immense wealth and market-value. In spite of his unassuming appearance, Offdensen is just as inclined to violence as the band, if not more so, since he willfully engages in it rather than merely being indifferent to it. He often gives specific orders to assault, torture, and kill those who threaten Dethklok with no hesitation or remorse.

The band's unnatural popularity and trail of destruction has attracted the attention of an Illuminati-style group, known as The Tribunal, which is dedicated to monitoring Dethklok's activity and preventing it from becoming too powerful; typically, episodes involve the Tribunal attempting to maintain and perpetuate public ignorance and rampant consumerism whenever Dethklok's antics inadvertently threaten to upset the status quo. The Tribunal, led by a mysterious character named Mr. Selatcia, works off the premise that Dethklok's unusual powers are the result of an ancient Sumerian prophecy about an Apocalypse of Metal. General Crozier, the military leader in the group, wants to kill the band, but is constantly held back by Selatcia from doing so. Most episodes show the Tribunal attempting to covertly thwart the band by calling in various specialists (with ridiculously complicated names), such as military pharmaceutical psychotropic drug manufacturers, celebrity depression experts, or various legally compromised characters who attempt to infiltrate the group.

The show, like many Adult Swim programs, had a 15 minute episode format for the first 2 seasons. Starting with 2009's Season 3, the show was reformatted into 30 minute shows.

A Metalocalypse one hour rock opera special, entitled Metalocalypse: The Doomstar Requiem, aired on October 27, 2013. A fifth and final season is currently in pre-production. 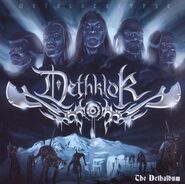 The cover to Dethklok's first album, The Dethalbum.
Community content is available under CC-BY-SA unless otherwise noted.
Advertisement