An edited English dub of Samurai Champloo premiered in the United States on Adult Swim from May 14, 2005 to March 8, 2006, with reruns continuing through March 7, 2008. However, the final 6 episodes actually premiered days before they aired on Adult Swim on "Friday Night Fix," an AS online streaming block that premiered on Friday, February 3, 2006.[2] The edits made to the series included foul language replaced with record scratches and cutting out blood and nudity. A less edited version of the English dub later aired on Adult Swim's Toonami programming block from January 2, 2016 to July 9, 2016.[3]

Mugen is a ferocious, animalistic warrior with a fighting style inspired by break-dancing. Jin is a ronin samurai who wanders the countryside alone. They may not be friends, but their paths continually cross. And when ditzy waitress Fuu gets them out of hot water with the local magistrate, they agree to join her search for the samurai who smells like sunflowers.

Samurai Champloo employs a blend of historical Edo period backdrops with modern styles and references. The series relies on factual events of Edo-era Japan, such as: the Shimabara Rebellion, Dutch exclusivity in an era in which an edict restricted Japanese foreign relations, and Ukiyo-e paintings. However, fictionalized versions of real-life Edo personalities like Mariya Enshirou and Minamoto Musashi were also featured. The exact placement within world history is questionable and is likely somewhat distorted by artistic license. For instance, the appearance of a six shooter in the episode of "Misguided Miscreants Part I" suggests that the story takes place after 1814, which is when that style of weapon was first invented, yet in the episode "Stranger Searching" it is explicitly stated that trade relations between Japan and the Dutch East India Company exist, the latter of which went defunct in 1798. Also, the samurai who smells of sunflowers is said to have taken part in the Shimabara Rebellion, which historically occurred between 1637 and 1638. Also incorporated within the series are signature elements of modernity, especially hip hop culture, such as rapping, bandits behaving like "gangstas," censorship bleeps replaced with record scratching, and much of Mugen's character design. 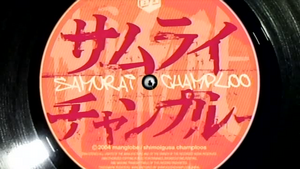 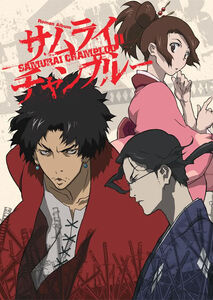