The Venture Bros. is an animated comedy from Christopher McCulloch (AKA Jackson Publick) and Doc (Eric) Hammer (Astro-Base GO!).

Originally a parody of Johnny Quest, the current Dr. Venture, former child-star of cartoon fame is NOT his successful, brilliant, inspired, decisive, capable, strong, attractive, likeable father. The show follows him as his dysfunctional friends and family try to maintain their relevance in a world that outclassed them before they were five. Soundtrack work from JG Thirwell bolsters the production to James Bond level, and contextual music selection and contributions from Doc Hammer (And his band, Weep) are consistently hip, fresh, evocative, and poignant. 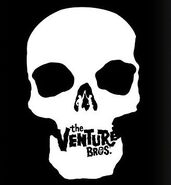