The Venture Bros.: The Music of JG Thirlwell is a soundtrack album by J. G. Thirlwell, released on April 7, 2009 by Williams Street. It comprises music that Thirlwell composed for the The Venture Bros. The CD features 20 tracks, while the vinyl LP release is 16 tracks and a download link of the complete release including the songs omitted from the LP. 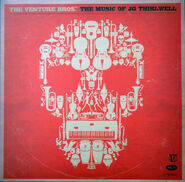 Retrieved from "https://adultswim.fandom.com/wiki/The_Venture_Bros.:_The_Music_of_JG_Thirlwell?oldid=11500"
Community content is available under CC-BY-SA unless otherwise noted.