Childrens Hospital is coming to SDCC 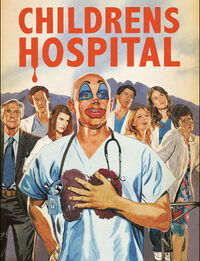 Warner Bros. is going to have a HUGE presence at San Diego Comic Con, and we’re excited to announce some early details about the event. They are taking 18 shows to the convention, including early screenings on Preview Night and a big Saturday event in Hall H. Wikia is going to be there, and we’re hoping to see you there too! This is the information we have so far about the presence of Children's Hospital at SDCC.