Williams Street is a production company that is currently owned by WarnerMedia. It was formerly by Turner Broadcasting System. Williams Street was formerly known as Ghost Planet Industries after Space Ghost's show in 1994-1999. All of Adult Swim is produced by Williams Street. Keith Crofford oversees operations for the studio building, which also houses the Cartoon Network offices. Mike Lazzo oversaw operations for the studio alongside Crofford until 2019, when Lazzo retired from the company, and Crofford exited the following year, while he was succeeded by Suzanna Makkos in 2021.

The name of the company is mainly named after the street that it lies on which is Williams Street in Atlanta, Georgia. This company is in the same building of Ted Turner who founded TBS, CNN and Cartoon Network.

The audio in the background of the logo is created by Jack Webb's production company Mark VII Limited.

The Williams Street logo is shown for about five seconds, and old shows are occasionally followed by a vanity card of a skull and crossbones with the old Cartoon Network symbol on the mouth, which was ended in 2004. The symbol was not used until after Ghost Planet Industries. 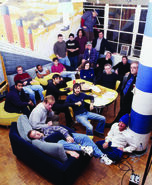