Witch Hunter Robin is a Japanese anime series produced by Sunrise and Bandai and directed by Shūkō Murase. The series originally aired in Japan between July 2, 2002 and December 24, 2002 on TV Tokyo and Animax.

The English dub of Witch Hunter Robin premiered on Cartoon Network's Adult Swim block from February 16, 2004 to March 30, 2004. The show then aired in reruns on Adult Swim through January 5, 2005, when the broadcast rights expired.

Witchcraft is a genetic trait, dormant within a number of individuals within the human population. Powers can be "awakened" in these dormant human "seeds" at any time, which seems to also drive the awakened witch into various forms of homicidal madness or sociopathy. Raised in an Italian convent, 16-year-old Robin Sana returns to her native Japan to join the STN-J, a secret organization that captures, rather than kills, witches of both sexes that abuse their supernatural powers. The typically mismatched crew includes hacker Michael Lee, rookie Haruto Sakaki, psychic Miho Karasuma, Yurika Dojima, the spoiled daughter of a prominent family, and the aloof Amon, the de facto leader of the team. As a "craft user," Robin can conjure fire as a weapon, but has some trouble with her aim. 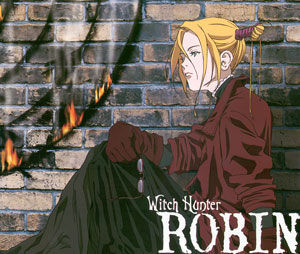